Our duly-elected chief executive, President Donald J. Trump, has had to fight a biased media, the Democratic Party, and embedded Obama Deep State operatives in our intelligence services. You would think that one place that the president would find objective journalism would the U.S. government-funded Radio Free Europe/Radio Liberty. But alas, this is not the case.

Take for instance the headline on the front page of the organization’s website today after the House Intelligence Memo was unclassified and released to the American public for all to see. You would think a media entity that spends its time ferreting out disinformation and the suppression of free speech in totalitarian countries would find such revelations of illegal surveillance against American citizens, and political candidates, shocking and disturbing, at least warranting further research and investigation. Sadly, this did not happen.

U.S. Republicans Release Controversial Memo On FBI With Trump’s OK, was the headline. Notice the insertion of the word ‘controversial’, not ‘shocking’ our ‘troubling’. The article itself is full of snarky quotes around conservative claims about what happened during the 2016 election and the special counsel investigation that followed.

There are other examples of liberal bias in this, again, government-funded organization. Take the Leftist narrative that was pushed recently by a liberal website, Hamilton 68, pushing an anti-Trump agenda regarding alleged ‘Russian interference’ in our Democratic process. Russian Trolls Found Amplifying U.S. Republican Charge Against FBI screamed the headline. Our website, Tsarizm.com, was listed at one point by the Alliance for Security Democracy project, as a domain that was supposedly being amplified by Russian propagandists. What you won’t find is a retraction from RFERL that discusses the reporting that came out after the #ReleaseTheMemo meme went viral-that the main cause, of the widespread chatter on the net regarding the memo and the demands for its release, was real conservatives in America pushing the truth to come out. Support for Trump, and love for the American democratic process and rule-of-law does not equal ‘Russian interference’ or ‘Russian propaganda’. 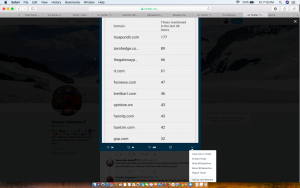 It doesn’t take much perusing of RFERL’s archives to find further tainted journalism or straight out bias and lack of concern for the truth if it conflict’s with their culturally-Marxist narrative.

I am sure Russia did attempt to divide our country and make us lose faith in our Democratic process. However, I don’t believe the effort was successful, and they most definitely were not the cause of Hillary Clinton losing the election. She did that all by herself. In any event, whatever Russia did or is doing pales in comparison to the corruption in the Obama administration which used the agencies of the federal government to persecute its political opposition.

…RFE/RL remains editorially independent from any government, political party, opposition group, émigré organization, commercial or other special-interest organization, or religious body, whether inside or outside its coverage area.

All RFE/RL employees are expected to take scrupulous care to avoid any action or relationship which results in:

Obviously their reporters and editors don’t follow these tenants as their reporting is biased, unquestioning, and simply propaganda when it comes to the Trump issue.

You would think America could expect better integrity from an organization it funds with taxpayer money. At least, you would expect to see both sides of the story, or some journalistic curiosity regarding government corruption within their own country, and from their benefactor. Or, maybe I’m expecting too much. Maybe many of their employees are fiercely anti-Trump as in the State Department, and have no problem with using their government roles to act seditiously.

I’m not asking for lock-step reporting in conjunction with the Trump, America First agenda. However, I am asking for fairness.

RFERL does a wonderful job of reporting on corruption in other nations, and it has a long history of fighting for freedom and democracy against communism. It should focus this expertise on its reporting of the Deep State activities in the United States, which are a bigger threat than anything Russia could do to our Republic and our way of life.

Chess Is An Important Part Of Russian Soft Power