For a long time now, dating back to the early days of the Obama administration, things have just seemed not quite right.

Actions were taken. Explanations were given. But somehow, things still just didn’t add up. I’ve had this lingering feeling for years that things were not as they seemed behind the green curtain in Washington.

The IRS attacks on conservatives; the Obama administration’s use of the administrative state to attack the political opposition; the purposeful instigation of racial tensions; the corruption of federal agencies like the Secret Service, the Department of Veterans Affairs and the Border Patrol; the transformation of the U.S. military from a war-fighting machine into a mutant social justice organization that can’t even keep its own ships safe — all fed the suspicion in the back of my mind that something was really wrong, even if we couldn’t see it.

Perhaps the most startling example has been the obvious corruption of the FBI under James Comey, his sweaty explanations on national TV to the contrary. This was not my father’s FBI. It was some mutation that seethed with corruption. Mr. Comey lied about Hillary Clinton. Loretta Lynch lied. President Obama lied. Mrs. Clinton sold U.S. secrets and lied, over and over and over.

Then along came Donald J. Trump, displaying a bright shining love for America and her people. Here was a man who spoke plainly, not in a polished way but truthfully. Here was a man who threatened the sickening corruption that bubbled under the surface in Washington and those coastal elites selling out the flyover people while padding their offshore accounts.

The vituperation he faced was hard to explain. Since when did “nationalist” become a dirty word?
And yes, here was a man who thought that having a better relationship with the largest country in the world, one that had the biggest nuclear weapons arsenal on the planet, was a good idea.

When it became clear Mr. Trump might win the presidency, that was when the “Russia thing” started.
For two years, we have heard about this supposed scandal with nothing to show for it. Now special counsel Robert Mueller, Jim Comey’s buddy, seems to be going after peripheral minnows since the big fish can’t be found.
It gets worse.

The animosity and the aggression against Russia is just palpable. Yes, the Kremlin probably has used cyberwarfare against us in a variety of ways. But we have done the same against them.

Mrs. Clinton tried to destabilize Vladimir Putin’s government. (She won’t admit that, of course.) China has stolen everything we have. Their weapons look just like ours. The Clintons sold them everything. Cuba is attacking our diplomats with sound waves, causing severe physical damage to our diplomats. North Korea is threatening to destroy us. ISIS is sending terror cells over the borders. 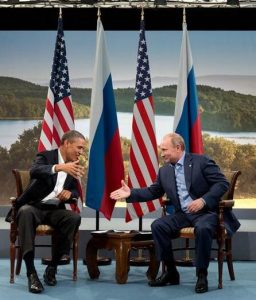 Russia is not our mortal enemy. The Russians are not an existential threat. They are an adversary. They have to be dealt with firmly. However, the “Deep State” effort inside our own government and foreign policy establishment to start a war with Moscow is out of control.

On Thursday, the State Department ordered the closure of the Russian Consulate in San Francisco and the reduction of services at other diplomatic sites. Secretary of Defense Jim Mattis was in Ukraine hinting we will provide weapons to fight pro-Russian separatists in eastern Ukraine, embroiling us in another civil war. Congress continues to push for tougher sanctions against Russia. 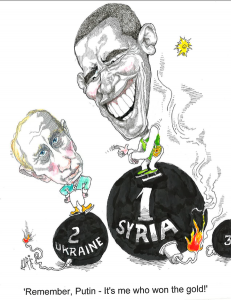 Is this Deep State agenda another tactic by the Obama holdovers to weaken the U.S. by getting us into another expensive conflict? Is it an effort to so muddy relations between the two countries that we can never have a new detente? Mr. Obama always was disrespectful toward Mr. Putin, talking about his schoolboy slouch and how Russia was a third-rate power that didn’t make anything.

Someone really wants a war with the Kremlin.

I’d love to know who it is and why.

The Hi-Tech Traditionalist: The Standing Ovation That Canadians Gave To The Islamic Murderer Omar Khadr Tells Us That Most Canadians Have Lost The Will To Live