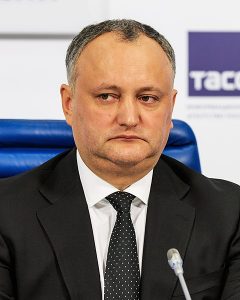 Moldovan President Igor Dodon, who is close to Moscow and opposes movement towards the European Union, today warned that the push to reunification with Romania would lead to civil war in the tiny former Soviet Republic. Moldova has been front and center in the struggle between Moscow and Brussels for influencing in Eastern Europe.

“I want this to be clear – unification [with Romania] amounts to civil war. I’m not afraid of saying this. We won’t allow anyone to wipe out Moldova as a state and we will use all legal means for this, and if you act illegally you’ll get what’s coming to you,” said Dodon, reported Russian state news agency TASS.

The Moldovan leader noted that the situation of 1918 when Moldova’s MPs “were forced into voting for unification by Romania’s soldiers won’t happen again.”

“Maybe those who are in power today – the Democrats and other parties – will benefit from this scenario? Because they know that they will lose the [parliamentary] elections this fall and want to destabilize the situation. We should be very careful about this issue,” added Dodon.

Moldova has made progress recovering from the massive banking scandal which crippled the country’s finances in 2015, and the ‘Russian Laundromat’, both of which saw many senior officials arrested and put in jail. Recently Moldovan banks have started to see outside investment which could further strengthen the financial sector.

“The former Soviet republic of 3.6 million people has secured the first foreign investment into its banks in more than a decade. Banca Transilvania SA, the second-biggest lender in neighboring Romania, this month bought about 40 percent of Victoriabank BC, Moldova’s third-biggest by assets. The European Bank for Reconstruction and Development, a minority owner of both lenders, says the deal can spur an upswing in Moldova,” reports Bloomberg.

Dodon’s warning of civil war may be an attempt to keep the country off balance and destabilized, therefore preventing its accession into the European Union.

Russian Police Go After Football Hooligans Ahead Of World Cup