“A number of IRGC soldiers were. killed and wounded in the clash, Unfortunately Saman Hassanpour, a brave Peshmerga platoon commander, was martyred in the clash,” the statement said. “The Iranian forces shelled the Peshmerga Forces’ positions in the mountains of Ziwa and Kona Lajan in Piranshar.” The Iranian forces “suffered a number of casualties” and were defeated, the PDKI says.

Iran’s Press TV also wrote about the attack. Fars News says the battle took place Sunday. “The clashes took place near a border checkpoint about 11 km from the Iranian city of Piranshahr early Sunday, during which one of the assailants was killed and the rest fled back into the Iraqi territory.” Both reports say that one Iranian IRGC was killed and another wounded, including Mohammed Hashmi ( Seyyed Mohammad Hashemi ), second lieutenant in the IRGC, was killed in the battle, and that a soldier by the name of Kasri Abdolalizadeh ( Kasra Abdolalizadeh)

The PDKI gives a background of their Peshmerga who was killed. “Saman Hassanpour, a college graduate, was born in 1989 in the Kurdish city of Sardasht. In 2006, he was arrested by Iran’s intelligence agency for having raised the Kurdish flag and was imprisoned for seven months. In 2016, Saman Hassanpour joined PDKI’s Peshmerga Forces. As a devoted and loyal Peshmerga, he rose within the ranks of the Peshmerga Forces and was one of the youngest and most promising platoon commanders.”

The announcement of the clash comes two weeks after the PDKI said that another battle killed and injured 27 IRGC members. Press TV also mentions recent clashes and points out the Turkey and Iran have sought to work together in recent months.

The clashes come as the US Secretary of State Mike Pompeo has ramped up rhetoric against Iran’s regime. Mustafa Hijri, leader of the PDKI recently said that on a visit to Washington that his group was seeking to reach out to other democratic opposition groups in Tehran. Mustafa Hijri, was in Washington from June 11-17 and held meetings with US officials, according to reports. He “held a full day of closed-door meetings at the Council on Foreign Relations (CFR).” He told Rudaw that eastern Kurdistan, or Rojehlat, in Iran, was “usually neglected” and that “policies of deliberated geographical fragmentation,” had harmed Kurdish areas. 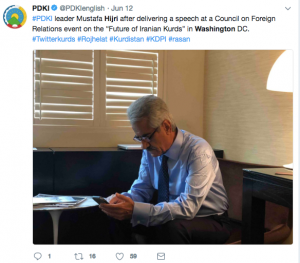 There is more interest in dissident groups in Iran after US President Donald Trump ended the Iran Deal and after Pompeo’s speech in May. Abdullah Mohtadi, head of the Komala Party of Iranian Kurdistan, was in Washington at the same time as Hijri.

Support for Kurdish groups in Iran has been desultory in recent years as the war on ISIS and other regional priorities were more important for western states and regional powers. However with the US willing to confront Iran, that might change.

Originally Posted At The Middle East Center for Reporting and Analysis

Half Of Latvians Believe Family Values In Decline