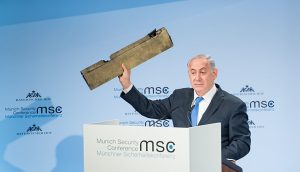 German Chancellor Angela Merkel has said she agreed with Israeli Prime Minister Benjamin Netanyahu that Iran’s activities in the Middle East represent a concern for the security of Israel.

“We agree that the question of Iran’s regional influence is worrying, especially for Israel’s security,” Merkel said at a joint news conference with Netanyahu after their meeting in Berlin on June 4.

Netanyahu is touring Germany, France, and Britain in a bid to rally support for amending the 2015 nuclear deal between Iran and world powers and for pushing Iranian forces out of neighboring Syria…