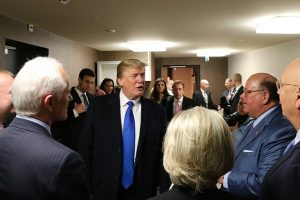 U.S. President Donald Trump, upon arriving in Davos, Switzerland, for the World Economic Forum, confirmed to Russian state news agency TASS that he wants to create dialogue with Moscow, and attempt to improve relations.

Answering a TASS reporter’s question on whether he is going to build dialogue with Russia, Trump said: “We hope so,” reported TASS.

Trump ran a campaign based on improving relations with the world’s largest country, and the one with the most nuclear weapons. However, he has been prevented from acting on this impulse due to the domestic media, and investigative climate.

Russian officials have publicly said they are frustrated with the president’s slow pace in seeking to change relations with Moscow.

Russian President Vladimir Putin said earlier this month that Moscow was ready to normalize ties with Washington, but “the domestic political situation in the United States has not calmed down,” reported TASS.