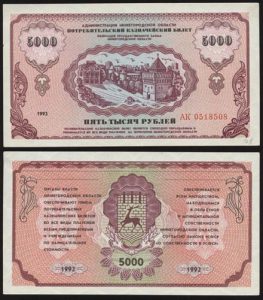 Today Russian President Vladimir Putin declared war against the hegemony of the U.S. Dollar. Of course, he couched the declaration in a statement saying Russia would work to counter the ‘excessive domination’ of certain reserver currencies.

The comments were published in an article in the runup to the BRICs summit scheduled to begin Sept 3 in China.

“We are ready to work together with our partners to promote international financial regulation reforms and to overcome the excessive domination of the limited number of reserve currencies. We will also work towards a more balanced distribution of quotas and voting shares within the IMF and the World Bank,” Putin commented, reported Russian state news agency TASS.

“I am confident that the BRICS countries will continue to act in a consolidated manner against protectionism and new barriers in global trade,” he said. “We value the BRICS countries’ consensus on this issue, which allows us to more consistently advocate the foundations of an open, equal and mutually beneficial multilateral trade system and to strengthen the role of the WTO as the key regulator in international trade.”

“The goal is to create a package of cooperation measures to work against the restrictive business practices of large multinational corporations and trans-border violations of competition rules.”

“We hope to be able to discuss new large-scale cooperation tasks in trade and investment and industrial cooperation at the Xiamen Summit,” Putin added, referring to previous BRIC agreements recently negotiated.

“Considerable practical achievements have been recently reported in this area, primarily the launch of the New Development Bank (NDB). It has approved seven investment projects in the BRICS countries worth around $1.5 billion,” Putin…This year, the NDB is to approve a second package of investment projects worth $2.5-$3 billion in total,” the Russian leader continued. “I am convinced that their implementation will not only be a boost to our economies but will also promote integration between our countries.”.

The hegemony of the U.S. Dollar in global trade and banking, since the Bretton-Woods agreements after WWII, have long been a thorn in the side of the BRIC countries. The dollar has an artificial bid, or demand, due to its status as the world’s largest and most important reserve currency. The U.S. does not have to worry about currency fluctuations as it can always print and sell more. There is almost infinite demand.

However, as the American debt tops $20 trillion on its way to $30 trillion, that demand may be starting to wane. This poses huge risks for America and huge opportunities for other less important currencies. The BRIC countries would obviously like to hasten the downfall of the dollar in global trade and banking operations.

It Was Bound To Happen: Russian Prime Minister Says US Conducting Economic Warfare Against His Country