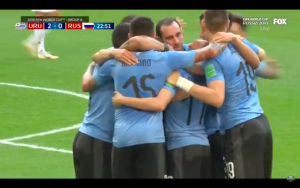 Uruguay defeated World Cup host Russia today in a 3-0 match, securing the top spot in Group A as both sides progressed to the knock-out rounds of the 2018 World Cup, reported The Telegraph.

“A first-half goal from Luis Suarez put Uruguay in control before a long-range effort from midfielder Diego Laxalt was deflected by Denis Cheryshev who suffered the ignominy of scoring an own-goal – the sixth of the tournament – on home soil. Despite having already qualified, Russia suffered a further setback when right-back Igor Smolnikov was handed a second yellow card after just 36 minutes as Stanislav Cherchesov’s side were reduced to 10 men. Edinson Cavani added a third in the 90th minute to completethe misery for Russia who suffered their biggest ever defeat at a World Cup finals,” wrote The Telegraph.