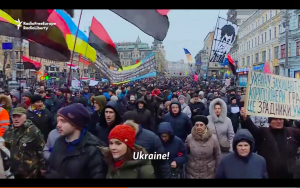 Supporters of jailed political activist Mikheil Saakashvili marched the the Ukrainian capital city of Kyiv today to demand the impeachment of President Petro Poroshenko and the release of Saakashvili from custody. The former President of Georgia was arrested by Ukrainian security forces recently after staging rallies in the capital and calling for an end to the alleged corrupt rule of the Poroshenko government.

Saakashvili was charged with colluding with Ukrainian businessmen with ties to Russia against the Ukrainian government. He denied the charges, reported Associated Press.

Demonstrators started at Shevchenko Park, holding up images of soldiers held prisoner in Donbass by pro-Russian separatists, and then walked to the facility where Saakashvili is being detained, reported RFEFL.

“Impeachment is a way to move from kleptocracy to democracy,” said Yegor Sobolev, an ally of Saakashvili’s who was removed Thursday as chairman of a parliamentary anti-corruption committee.

Saakashvili could be extradited to Georgia where he is wanted on corruption charges.

Saudis Tell Russia Its Actions Will Have Dangerous Consequences In Syria