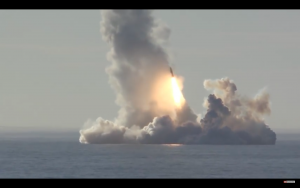 As sanctions have become more and more restrictive on the Russian Federation, a narrative has begun to crystallize coming out of the Kremlin as a response to the financial punishment. WWIII is coming if you don’t end sanctions! is the new slogan.

A perfect example of this new Moscow talking point were the comments of the head of VTB, a large Russian financial institution connected to the Kremlin. “What concerns me more than any economic sanctions, that for the first time since the Cuban (missile) crisis — people, at least in Russia and probably in America also, have started to feel that there is more danger of World War III,” Andrei Kostin, the president and chairman of Russia’s VTB Bank told CNBC’s Geoff Cutmore in Moscow, wrote CNBC.

“There is a recent public opinion poll (in) Russia (that) showed that 55 percent of Russians now believe or think that World War III is possible because of the aggressive policy of the United States,” he added.

“It’s very, very serious to reflect on what’s happening in national affairs. The world is becoming a much more dangerous place to live,” he said. “And that’s a great concern,” reported CNBC.

In a related stunning visual display, Russia launched four of its new Bulava submarine-launched ballistic missiles (SLBM) in a rousing show of force this week. The missiles flew downrange and landed in a test zone in the Russian Far East.

“The RSM-56 Bulava (Russian: Булава, lit. “mace”, NATO reporting name SS-NX-30 or SS-N-32 , GRAU index 3M30, 3K30) is a submarine-launched ballistic missile (SLBM) developed for the Russian Navy and deployed in 2013 on the new Borei class of ballistic missile nuclear submarines. It is intended as the future cornerstone of Russia’s nuclear triad, and is the most expensive weapons project in the country. The weapon takes its name from bulava, a Russian word for mace,” writes Wikipedia.

“Four launched in 20 seconds. All 16 could launch in under one minute. Four SLBM can deliver a total of 24 MIRV warheads with 2,400 kilotons is the equivalent of 160 Hiroshima’s,” wrote Express.co.uk.

Several weeks ago, Russian President Putin showed images of Russia’s new nuclear weapons, including ‘indefensible’ cruise missiles, and nuclear drones. If you listen closely to the state-sponsored media coming out of Moscow, you will hear the WWIII narrative repeated multiple times in different formats. It remains to be seen if it will be effective.