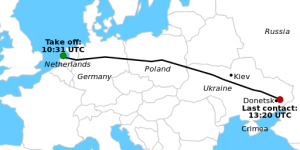 Image by Geordie Bosanko and cmglee

The official investigatory body examining the shutdown of Malaysia Airlines flight MH-17 in East Ukraine today released findings confirming it was a unit of the Russian military that conducted the deadly act. The video below outlines the public evidence available at this time.

Wilbert Paulissen, head of the crime squad of the Netherlands’ national police, said the missile was fired from Russia’s 53rd Anti-Aircraft Brigade.

“All the vehicles in a convoy carrying the missile were part of the Russian armed forces”, he told a televised news conference, reported The Moscow Times.

“The joint investigation team (JIT) looking into the incident is made up of Dutch prosecutors and police and others from Australia, Malaysia and Ukraine. At a press conference in The Hague on Thursday, the investigators showed photo and video evidence that they said proved they had identified the specific BUK system responsible for shooting down the plane. They said they had “legal and convincing evidence which will stand in a courtroom” that the BUK system involved came from the 53rd anti-aircraft missile brigade based in Kursk, in western Russia,” reported The Guardian.

Investigators say that the missile that brought down Malaysia Airlines Flight 17 over Ukraine in 2014 was from a Russian-based military unit. https://t.co/K9wQxTBf1M

“We don’t want to tell everything we know because then we are opening our cards to the other side and we do not want to do that,” said Fred Westerbeke, the chief prosecutor, reported The Guardian.