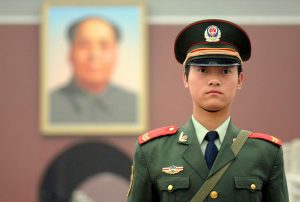 Russia intends to deepen military cooperation with China, declared Russian Defense Minister Shoigu at a meeting with Vice Chairman of China’s Central Military Commission Zhang Youxia. Beijing and Moscow had made a show of joint military exercises off the Korean Peninsula and close to NATO in the Baltic Sea over the last year as tensions have increased in both regions.

“Shoigu noted that comprehensive extension of strategic cooperation with China is absolute priority for Russia’s foreign policy. In light of this, he reiterated that the 15th anniversary of the signing of the Treaty of Good-Neighborliness and Friendly Cooperation between the two countries was celebrated last year. “Highly confidential relations between the Russian and Chinese state leaders play a very important role in bilateral ties. Russian President Vladimir Putin participated as the main guest in the Belt and Road Forum that was held in Beijing in May, in July China’s President Xi Jinping visited Russia, and in November the leaders held substantial talks on the sidelines of the APEC summit in Da Nang,” the defense minister noted,” wrote Russian state news agency TASS.

“We intend to further develop relations between our defense ministries in all areas. I am confident that today’s meeting will help it,” added Shoigu. His Chinese counterparts reiterated the sentiment.

Russia and China have seen significant increases in military capability over the last decade as America weakened her power projection capability during the Obama administration.

The two nations see joint cooperation as a check against a resurgence of American military power under President Trump, who has already seen a large increase in military spending for the United States.