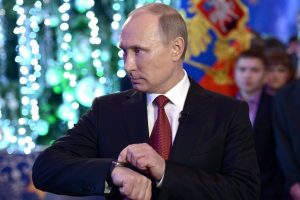 Russian President Vladimir Putin warned to the United States not to provide weapons to the separatists in East Ukraine while speaking today at the BRICs summit in China. The leader of the Russian Federation, who is backing the rebels in Donbass, hinted that if America did move forward with the weapons proposal, many more would die and the separatists may even expand their campaign further in Ukraine.

“The delivery of weapons to a conflict zone doesn’t help peacekeeping efforts, but only worsens the situation…Such a decision would not change the situation but the number of casualties could increase,” reported Reuters.

“The self-declared (pro-Russian) republics (in eastern Ukraine) have enough weapons, including ones captured from the other side” said Putin.

“It’s hard to imagine how the self-declared republics would respond. Perhaps they would deploy weapons to other conflict zones.”

Putin also signaled Russia would draft a U.N. resolution asking for armed U.N. peacekeepers in Ukraine if a number of preconditions were met. “It would help resolve the problem in eastern Ukraine.”

The One Shock Russia Dodged Is Catching Up With Putin