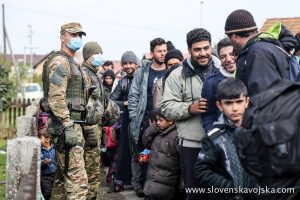 The European Court of Justice will rule this Wednesday whether a scheme put together by the EU to relocate migrants from souther periphery countries is legal. The plan has been challenged by the Eastern European countries of Hungary and Slovakia. The EU Commission has instigated legal challenges against Poland, Hungary, and the Czech Republic over their refusal to follow its directives on the issue which would force them to admit thousands of ‘refugees’ to destroy their security and culture.

“The Luxembourg-based court’s senior lawyer Yves Bot recommended in July that the judges throw out the challenge, arguing the so-called relocation scheme was a proportionate means to help Greece and Italy. The court often follows such opinions but not always,” wrote AFP.

The was put together in Brussels to help relocate migrants from the countries of first origin in the Mediterranean, namely Italy and Greece. The ‘Dublin rules’ had previously declared that migrants must seek asylum in the EU country where they first landed.

International and EU law specifies countries must give asylum to those fleeing war or persecution; however, not for economic reasons.