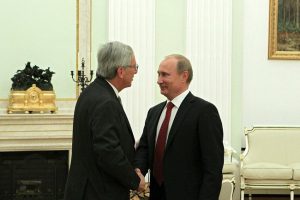 The head of the European Commission, Jean Claud Juncker, in an interview over the weekend with the Dutch news outlet Trouw, declared Europe dying, called Vladimir Putin his friend, blamed Obama for the new Cold War, and said, “there is no European security agenda without Russia.”

Wikipedia states, The European Commission (EC) is an institution of the European Union, responsible for proposing legislation, implementing decisions, upholding the EU treaties and managing the day-to-day business of the EU.

With all of the animus in Europe against American President Donald Trump, to hear this viewpoint from a very senior European official is quite shocking. Many analysts have declared Europe no longer has the willpower to protect itself or its culture. These statements may be evidence of that reality.

Here are some of his comments…

“My friend Vladimir Putin — because we have been friends for years, even though nowadays you cannot say that Putin is your friend — was at the time very unpleasantly affected by that one sentence of President Obama when he said [in 2014 in The Hague] that Russia is only a regional power.

“If there’s something Russia is not, then that is it. We must learn to talk to Russians on an equal footing, at eye level.

“We need to re-establish contact with Russia,” the Commission president added. “Russia is a major player. There is no security agenda for Europe without Russia. I don’t like the current Cold War rhetoric.

“We Europeans sometimes think that we are the boss of the world,” he said. “We forget that we are a small and weak part of the universe. We are losing economic power. We are slowly but surely falling from 25 percent of global gross national income to 18-16 percent.

“We are on the losing side also demographically,” he said, adding: “We exist culturally, but we are not dominant. So I always invite everyone here to a more pronounced modesty. We must indeed listen to the rest of the world.

It is true that President Barack Obama’s comments about Vladimir Putin and Russia were childish and arrogant and most certainly angered the Kremlin, and could be in part to blame for Russia’s split from the West. It is also true that the West needs to be in communication with the Russian leadership.

However, the comments about a dying Europe and the willingness to ignore Russia’s active measures against members of the EU is quite shocking, and telling as to the reasons behind the EU leadership’s behavior regarding a variety of issues, including the invitation to millions of economic migrants to flood Europe and change its culture and security forever.