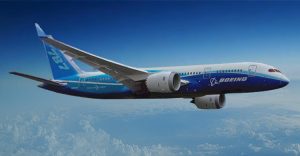 Azerbaijan Airlines President Jahangir Askerov announced today at the Dubai Airshow the Central Asian nation will purchase 2 787 Dreamliners from the Boeing company. The Dreamliner is a technologically advance aircraft made from composites and dramatically improves cruise performance and fuel use.

The aircraft will be wide-body freighters.

“Boeing Commercial Airplanes President & Chief Executive Kevin McAllister said at a news conference a decision would be made at a later date on whether the Central Asian carrier opts for the 747 or 777 freighter. The total value of the deal at current list prices, which also includes a landing gear maintenance agreement, is valued at around 1.9 billion dollars, a Boeing executive said. Azerbaijan Airlines at present has two 787-8s in its fleet,” reported Reuters.