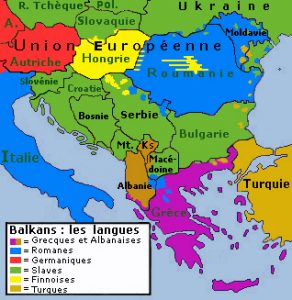 On Saturday, 11 November, discussions between Albanian Foreign Minister Bushati and his Greek counterpart Kotzias, were held on Kreta island. The meeting to solve pending bilateral issues seems to have produced good results. Talks were centered on the problems of the Greek minority in Albania and other important topics, such as the Yonian Sea Agreement, and the Law of War between the two countries.

Greece has accepted that the part of the Yonian sea they acquired under the 2009 agreement was illegal. Albania lost sovreignity on part of its territory.

The agreement prescribed that a part of the Albanian Yonian Sea would pass to Greek control. At that time, there was lots of debate between the Albanian government that signed the document, and the opposition and civil society on the other side, who called the procedure a clear betrayal of the interests of Albania.

For the first time in 8 years, the Greek government has accepted that it was a big mistake. The two foreign ministers agreed to sign a new document soon, in which Albania will gain back its territory and will not lose a single square meter.

The question of whether people involved in signing the 2009 Sea agreement, former Prime Minister Berisha, former Foreign Minister Basha, and the Head of Prosecution Office Llalla, will bear any responsibility and be investigated for such an error, remains to be seen.

Regarding the withdrawal from the Law of War between the two countries, international expertise is necessary, but both governments are optimistic that it may be attached to the new treaty of bilateral friendship, to be drawn in the coming months.

According to Albanian Foreign minister Bushati, such an old file of over 70 years needs its time and necessary instruments to get solved, based on a European framework and international rights.

As for the issue of the Greek soldiers’ memorial, who died in Albania during the Second World War, the matter is considered closed.

It looks like a new era is coming, concerning further improvement of relations between the two neighbouring countries. Greek Foreign Minister Kotzias declared that discussions for the integration of Albania into the EU are optimistically continuing.

Russia And Greece – Together At Last!