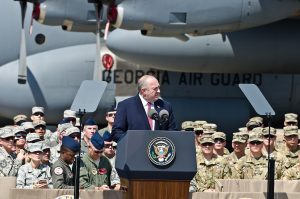 The president of the South Caucasus nation of Georgia, Giorgi Margvelashvili, railed against internal corruption in the country’s government in a speech today, and said Georgia should continue a policy of ‘strategic tolerance’ with the Kremlin, in order to not provoke further armed conflict.

This policy “is important for Georgia in current circumstances,” suggesting that Moscow could be seeking a pretext for fresh conflict, reported RFERL.

“Georgia must not follow any of [Russia’s] provocations and do its best not to give Russia a chance to use force against Georgia.”

Georgians who have committed “violence against ordinary people are currently working at the prosecutor’s office and law enforcement agencies.” He said that while this problem was not as pronounced as it was before, “these individuals are still in the law enforcement agencies and the system has not been depoliticized,” added RFERL.

Russian news outlet, RIA Novosti, quoted Margvelashvili as saying, “As for foreign policy, it is necessary to pay attention to the main factor – this is the Russian Federation <...> In general, I want to say that the policy that implies strategic patience is right. The main goal is not to succumb to provocations and not to allow Russia to use force in “This issue is becoming increasingly important, especially after the transition to a new phase of relations.”