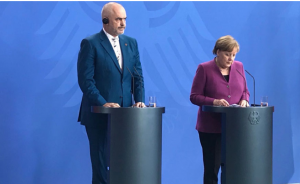 First the Head of the Albanian government had a meeting with Wolfgang Schauble, the President of the German Parliament that will decide on the recommendations for opening EU negotiations with Albania in June.

In their mutual press conference, Merkel admitted the progress made by Albania, but she added that the decision will be reached in the coming days.

“Albania has worked hard for some issues. We will create a final opinion, after we discuss the EC recommendation with other European colleagues. Let me say explicitly that Albania has started essential reforms and there is progress. Through the vetting process, they are assessing the performance of hundreds of judges and prosecutors; such process will foster the judicial system of the country and the people’s confidence in it. But the control should be extended among the police ranks, as well. I encourage the Albanian PM to continue this way”, she concluded.

Rama thanked Merkel for her support to the Western Balkan region, especially to Albania. He expressed his confidence that Albania deserves to open negotiations with the EU after having undertaken reforms.

Rama sounded less demanding than other times when meeting EU officials, stating, “Thanks to their vision and integration power, the Berlin process has transformed the Western Balkans. When we met in 2014, we discussed the necessity of the deep judicial reform we had to make and now we feel proud to see that we have made progress in this direction. The European Commission has assessed our judicial reform process, as a model for other Western Balkan countries to follow”.

Rama expressed his strong hope to have Germany’s support in June. “It is quite clear for us that this is not the end; it is the end of a phase to begin another more challenging one. I am here to show my confidence that Albania should not lose more time to start negotiations with the EU. In my country, Christians and Muslims coexist together in harmony. But from North to South, Albanians have the same religion, and that religion is Europe”, he stated.

Rama’s meeting with Merkel was essential for Albania, as it came shortly after the European Commission recommendation to open negotiations, but also after some doubts about German MPs, who have expressed against giving a chance to Albania’s accession. So, it was expected that Merkel would be more explicit on which side Germany will decide. But as often happens, the same general terms expressed could not make a clearer distinction between fish and flesh.

Meet The Woman Behind The Blue Swing State Pro-Trump Vote