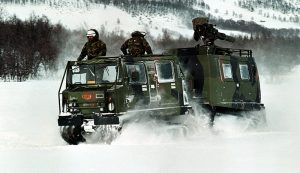 The Kremlin threatened Norway with ‘consequences’ on Thursday for extending a rotating deployment of U.S. Marines and increased military preparation to counter Russian military actions in the area.

“On Tuesday, Norwegian authorities announced their intention to extend the country’s program for defense cooperation with the US for at least five years. It is a program in accordance with which 330 US Marines were deployed to western Norway in January 2017. More than 300 additional marine troops are expected to be posted to Setermoen in northern Norway following the current talks between Oslo and Washington,” reported Russian state news agency TASS. “Besides, the Norwegian Defense Ministry announced that the US planned to build infrastructure facilities for four fighter aircraft at the Rygge air base near Oslo. Being Norway’s neighboring country, Russia is highly concerned about these developments.”

“Such actions run counter to the decision Norway made in 1949 not to allow foreign states to set up military bases on the country’s territory until Norway was under attack or threat of attack…Such steps indicate that Norway is not predictable enough, they may lead to rising tensions and trigger an arms race, destabilizing the situation in northern Europe,” the Russian embassy said, adding that “we consider them to be clearly unfriendly so they cannot go without consequences.”

“We are particularly concerned that Oslo is implementing these plans when there is neither substantive political dialogue nor meaningful contact between the [Russian and Norwegian] militaries, as Norway has been avoiding contacts,” the statement says.

“We believe that European security must be equal and indivisible. It is only possible to ensure it if true national interests are pursued, while there is mutual respect and cooperation. The sooner Oslo comes to realize it the better,” the Russian embassy said, added TASS.

Perceived Russian ‘aggression’ in the Baltic Sea has pushed the Nordic countries further into the arms of NATO and countries in the region are begging for U.S. military deployments to counter Moscow’s agenda in the area. Sweden and Finland have called for more robust defense spending and preparation, and have even entertained joining the NATO alliance.

Someone Is Blowing Up Ukrainian Arms Depots Again