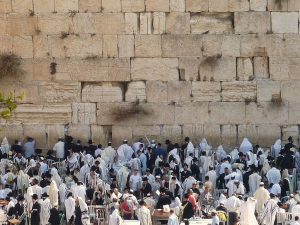 Anyone who has visited the Temple Mount in the center of the old city of Jerusalem in the last decade must acknowledge the obvious: that Jerusalem is the indisputable capital of Israel.

I guess there are many intellectually dishonest people out there, but the resistance to the obvious is based on ideology, not historical truths.

I say the conclusion is obvious because Israel, after capturing the Temple Mount during the 1967 war, began excavating along the Western Wall of the Second Temple, which was built on the site of the first, destroyed by the Babylonians. The Jewish people have called Israel, or the land of Canaan, their home for three thousand years.

The archeological facts overwhelmingly support Jewish claims on the area, long before anyone else arrived.

All you have to do is go down into the tunnels along the western retaining wall of the Second Temple, and see the massive stones that form the bedrock of the wall, stones that were placed there by King Herod two millennia ago, to understand the Jewish heritage of Jerusalem. We’re talking about a history that predates by almost a thousand years the rise of Islam. And these walls were from the Second Temple, built on the top of the original, for which there is archaeological evidence as well.

Today you can see the remains of the Second Temple’s exterior plaza and walls, piled along the side of the original structure, thrown there by the Roman soldiers who destroyed the temple and buried it to erase any trace of the Jewish claim on the area.

Yet, in the face of all of this history and the kind of proof you can touch, Israel has remained an impartial steward of the holy sites. The Dome of the Rock, the Al-Aqsa Mosque and the surrounding Christian sites, are free to the faithful of the world’s other major religions to visit and worship as they wish.

In fact, those in the West who decry Israel for its fierce defense of its borders do not understand the grace with which Israel has handled the status of the Temple Mount, the most holy site in Judaism.

The “deniers” most likely also do not know that the Roman Empire, after crushing the Jewish rebellion after the death of Christ, erased all traces of Jewish history in the area, and created a revised “history” of the newly-minted Palestine — hence the creation of the term “Palestinians.” These Palestinian people were simply a collection of Arabs who immigrated to the area once the Jews started returning to Zion centuries later, providing jobs for the Arab laborers.

It is worth noting that the Jordanians, who previously controlled the Temple Mount, did not allow free access to their Jewish neighbors. They did not show the same kind of maturity and tolerance that the Israelis have shown since 1967, to all religions.

The Palestinians and other Islamic leaders still cling to their narrative that the Jewish people have no historic claim to the Temple Mount. This is worse than Baghdad Bob, who denied the advances of American troops who were in the process of capturing the Iraqi capital during the Iraq War. The Palestinians have rejected peace, over and over again, in order to keep alight their hatred of anything to do with Israel and to deny its right to exist.

As Golda Meir famously said, “We will have peace when the Arabs love their children more than they hate us.”

One thing is for sure, in the near future, Palestinians will still try to kill Jews, and Israel will still keep the Temple Mount open for all who want to worship in Jerusalem.

Yes, Jerusalem is the capital of Israel, the everlasting home of the Jewish people, who now once again Israelis have control of their birthright. I’m glad we finally have a president who has the guts to say so, and do something about it.

Russia Is Responsible For Russia’s Problems, No One Else