“A letter has been sent by the Qataris to Trump envoy Jason Greenblatt,” a knowledgeable source says. The source goes on to say that it spells out terms under which Hamas would agree to work within a Palestine Authority framework. It would ostensibly offer some kind of opening to Israel and PA under the parameters of the “deal of the century,” where the PA would return to control in Gaza in exchange for Hamas normalization/reconciliation in the West Bank. This would give Hamas new and unprecedented influence over the PA not seen since 2006. Greenblatt is US President Donald Trump’s Special Representative for International Negotiations. He recently spoke to an AJC audience about the administration’s commitment to Israeli-Palestinian peace.

Is Doha maneuvering amid the current crises of Gaza protests and before a round of important Fatah-led Palestinian meetings in Ramallah? This would put the Qataris back at the table as brokers of some kind of initiative and it would signal to the Trump administration that Doha’s influence over Gaza is genuine and can bring results. It also ties in to Qatar’s dispute with the UAE and Saudi Arabia and Qatar’s attempts to get into the good graces in Washington by playing a positive role in peace. The UAE, Saudi Arabia and Egypt have their own interests in Gaza that range from issues involving former Gaza leader Mahmud Dahlan and concerns about Sinai security. Israel would also likely oppose any opening for Hamas in the West Bank and the US, which views Hamas as a terrorist organization, would not want Hamas expanding or being able to operate openly in the West Bank.

A second source says that “the Americans have informed PA intelligence chief Majed Faraj that this letter does exist.” That would indicate that the Americans or Qataris have passed on this “letter” or some substance of it to the PA. Faraj and PA Prime Minister Rami Hamdallah were targeted in a bombing in March, an incident that the PA has blamed on Hamas.

“Basically they are saying that Hamas is prepared to work with the Americans on the ‘deal of the century’ in return for control of Gaza and influence in the West Bank. The interesting thing is that Qatar is trying to bring Hamas in.” Apparently, the second source says, the “letter” comes from Emir Tamim bin Hamid al-Thani.

This seems far-fetched, Hamas grasping at straws. So where could it connect with reality?

President Trump met with Tamim in January and on April 10 and Greenblatt tweeted a readout of the second meeting. Qatar has been trying to encourage Trump through contracts that would support jobs in the US and claims that Qatar joins the US in concerns about Russia, Iran and also terrorism and extremism in the region. Greenblatt has supported Israel-Qatari partnership in the past. He tweeted in February that “Qatar partnering with Israel can bring real relief to the people of Gaza. Ending support for Hamas and focusing on humanitarian aid and reconstruction will end the suffering.” Greenblatt has been pushing stories related to Qatar-Israel cooperation on humanitarian issues in Gaza. 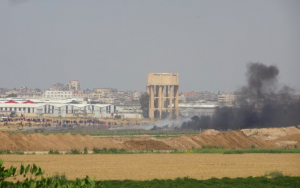 Gaza and Israel are in the midst of a crises over the last four weeks in which Hamas has encouraged tens of thousands to protest at the border of Gaza. Thousands have been wounded, many of them with live fire and more than thirty have been killed in four Fridays of clashes. Hamas is desperate for relevance in this situation and is seeking to use one of the last quills it has by mobilizing people. It has failed over the years using bombing campaigns, kidnappings, missiles, tunnels and other efforts against Israel.

The Palestinian National Council is scheduled to meet on April 30 amid controversy as some factions, such as Hamas, have called to boycott the event. The other factions have claimed that Mahmud Abbas and Fatah seek to dominate the meeting and that their members cannot travel to Ramallah for the meeting. The US is scheduled to open its embassy in Jerusalem on May 14.

The controversy of Qatar’s relationship with Hamas and its financial support for work in Gaza has been percolating for years. When Alan Dershowitz returned from Qatar in January he wrote about conversations he had there at The Hill. The Qatari ambassador to Gaza Mohammad al Emadi “told me that the building projects sponsored by Qatar [in Gaza] were ‘coordinated’ with Israeli authorities. Furthermore he wrote that “the Qataris claim that American officials had asked them to allow the Hamas leaders to live in Doha and that they have now left.”

Even Qatar’s work in Gaza has not all gone smoothly. In February Emadi was the center of controversy after some Gazans claimed their salaries had not been paid. Qatar has claimed its aid to Gaza spares Israel conflict.

The New Arab also reports that Saudi Arabia has backed Abbas and PA sanctions on Gaza. The PA wants Gaza returned to its control. The April 25 report claims that Egypt has not been able to persuade the PA to work with Hamas on national unity and that they cannot get Hamas and Fatah delegations to restore contacts. Qatar’s moves might be designed to mend this fracture or at the very least bring Hamas a little room to maneuver amidst its isolation.

Hamas said in mid-March that its marches on the Gaza border were in reaction to the US decision to move the embassy. However Salah al-Badawil, a Hamas political bureau member, claimed on March 20 that the movement was willing to “engage in dialogue” with the US. Hamas has also blamed failure in reconciliation on pressure from the US.