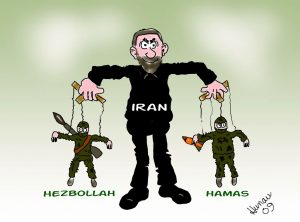 On April 22, 2018 Ali al-Amine (Amin علي الامين), a Lebanese politician and journalist was attacked and hospitalized. He was a candidate for the Shbeana Haki (شبعنا حكي) or “we are fed up” list.

He is a candidate for the May 6 elections in Lebanon in the 3rd southern district (South Lebanon. III- Nabatiyah, Bint Jbeil and Marjeyoun-Hasbaya). He was attacked in his home village of Chaqra which is north of Bint Jbeil and west of the Israeli border. He was apparently attacked by dozens (reports say 40) while hanging banners for his campaign. He was taken to Tibnin hospital. He claimed that the assault was carried out by Hezbollah activists. “My whole body has been hit by a bunch of thugs, and this is what I put on the face of the president and the election watchdog,” he said.

Amine’s List said it was a “blatant and humiliating [attack during] elections that are supposed to be democratic, and this reflects the failure of the de facto forces and their acceptance of any change in their areas.”

He has been in the news before, not least because he writes and interviews as a journalist. Al-Arabiya wrote about him in 2016. “Al-Amine is the torchbearer of the Al-Amine family, one of the most prominent Shiite families in Lebanon.” The article claimed that Amine had written about Hezbollah loses in Syria that year. In 2014 his house was attacked by Hezbollah supporters. 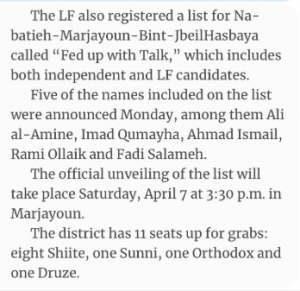 And The Daily Star reported that the list was put forward on April 7, providing a list of candidates for the district. Lorientlejour.com also provides a map and list of the candidates. They provide a long profile of Amine. It notes that he is opposed to the hawkish “fascist” Hezbollah which styles itself the “resistance.” It goes on to note he is “The eldest son of the Shia ulama Mohammad Hassan el-Amine, he was raised in the tradition of Shiite Amelite: the original Lebanese Shiism, in perfect symbiosis with the Lebanese particularity – or that tends to be it -, and which is based on a clear distinction between politics and religion…Amelism converges with the tradition of Najaf, where Ali el-Amine was born and remained until his six years.” This would indicate he was born in Iraq.

Amine in his own words

“We are witnessing an uprooting of the Shia identity, in its Lebanese, Arab and generally Muslim sense, and the genesis of another identity,” Amine says. “The end of the models of erudite and progressive scholars, exploring the currents of thought of left.” The piece claims that his family home in Chaqra was damaged three times by Israeli shells. He accuses Hezbollah of reaching for a kind of dictatorship in Lebanon, of the sort that has taken place in Iran.

In a longer interview at Janoubia he also discussed the attempt by Hezbollah to campaign under the guise of “resistance” and the need for opposition. He accuses Hezbollah of “consolidation of the situation of tyranny.” He goes on to note: “The battle of the south of the election on the importance of the electoral issue, different from the rest of the Lebanese regions, is the battle to prove the right of political presence in the face of the trend of [monopoly by Hezbollah], which is practiced against the southerners in the name of ‘resistance’ and on behalf of the unity of the community, while the main purpose of these slogans is to prevent diversity in the south that He expresses himself politically and at different levels.”

In 2017 he had also written about the difference between Hezbollah’s propaganda tours of the south and his own view that it was used as an excuse and distraction when Lebanon should be trying to progress economically, like Israel.

He was very critical of Hezbollah in the days leading up to the attack. In an interview on April 18 he lashed out. “There is an organic link between the weakness of the state and the presence of Hezbollah. The party’s interest in the strategic sense – in case it does not participate in power – is always to say that this country is corrupt and weak.”

The attack on Amine has caused outrage in Lebanon, particularly among fellow journalists and opposition to Hezbollah.

40 #Hezbollah thugs beat up Ali Al Amin in his hometown #Chakra. #Lebanon. Al Amin, who’s running agst Hezbollah in the South, was just admitted to the hospital. He is in a bad shape, but will hopefully recover and continue his noble and peaceful fight against these terrorists

For instance Hanin Ghaddar writes “thugs beat up Ali Al Amin in his hometown #Chakra. #Lebanon. Al Amin, who’s running agst Hezbollah in the South, was just admitted to the hospital. He is in a bad shape, but will hopefully recover and continue his noble and peaceful fight against these terrorists.”

All the support goes to Lebanese Candidate and journalist Ali Al Amine, who’s running against Hezbollah in his town Chakra (South Lebanon), he was just beaten up by some Hezbollah thugs for hanging his own picture on a wall.

And Luna Safwan writes “All the support goes to Lebanese Candidate and journalist Ali Al Amine, who’s running against Hezbollah in his town Chakra (South Lebanon), he was just beaten up by some Hezbollah thugs for hanging his own picture on a wall.”

Antoine Haddad, a politician with the Democratic Renewal Movement and an ally of Lebanese Prime Minister Saad Hariri, posted about the attack on Amine on Facebook, calling it “brutal” and saying “democracy cannot coexist with armed groups.” Amine is a candidate in the parliamentary elections scheduled to take place on May 6. Journalist Diana Moukalled tweeted solidarity for Amine against the “barbarism of Hezbollah.” Abbas Hodroj, a student, posted a photo of Amine in hospital and alleged that Iran’s Islamic Revolutionary Guard Corps had a role in the attack. Larissa Aoun of SkyNewsArabia also condemned the attack as an example of “pressure, harassment and violations against opposition candidates.” 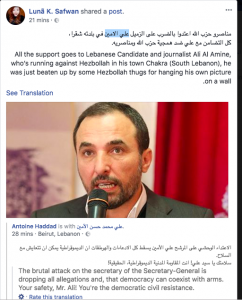 As the election season heats up there will be other controversies.

On April 19 Lebanese parliament speaker and head of the Amal Shi’ite movement Nabih Berri said he was nonplussed that Saad Hariri had toured south Lebanon “without coordinating.”

VIDEO: US Special Forces Attacked In Syria And Return Fire