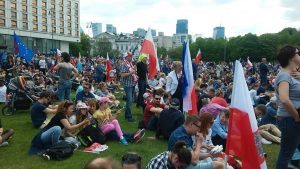 The pressure on the Polish government is increasing over the laws recently passed by the Polish lower house of parliament which would change the selection procedures for the nation’s top courts.

Prime Minister Beata Szydlo gave a public speech today on television today in which she defended the new law on how judges are nominated and confirmed. Szydlo said that Poland would not bow to pressure “from Polish or from foreign defenders of the interest of the elites.”

Thousands of protesters gathered in the front of the presidential palace to demonstrate against the new laws and to urge the president to veto the measure. Opposition members became somewhat violent an began kicking over barricades according to some reports.

The former Polish prime minister and sitting president of the European Union, Donald Tusk, said today, “Subjecting the court to one ruling party in the way that Law and Justice has proposed it will ruin already strained opinion on Poland’s democracy.”

The crux of the argument is the push by the European Union and groups influenced by George Soros to incorporate a secular, progressive, open borders agenda across Europe. The Christian countries in the East refuse to be bullied into doing so and are fighting back. The Law and Justice Party which rules Poland has said they will not back down in the face of multiple threats from Brussels.

The Polish government sees the courts as a bastion of Marxist sympathizers who are undermining the country’s culture. It is worth noting that in the United States, judges are nominated by the executive and confirmed by the legislature, not by an outside body of Leftist ‘legal’ experts, but by those elected by the people.