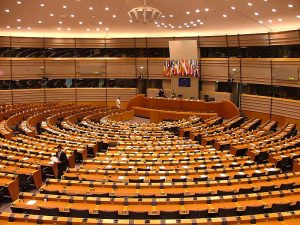 The European Parliament has condemned Hungary for human rights issues and a breakdown of the rule of law. Brussels is now threatening all-out financial war against both Hungary and Poland, among others, for alleged human rights abuses and anti-democratic policies and actions. But with conservative governments insisting on their sovereign right to protect their borders and preserve their national identities, Europe is headed for an existential crisis from which it may not recover in its current form.

The primary issue is the forced acceptance of hundreds of thousands of Islamic migrants into these Christian countries. Currently, the refugees have been welcomed in some Western European nations, which has led to extreme social unrest. Leaders in the West are eager to find a safety valve, and Eastern Europe looks like a good solution. Western Europe has already given up any defense of its culture and its very heritage. The globalists in the EU leadership want others to suffer their fate — along with the violence, sexual discrimination, crime and terror that comes with such policies.

Brussels is also upset at measures instituted by both Budapest and Warsaw that the EU sees as anti-democratic and oppressive. These include: restrictions on the media, a law against a George Soros-backed university in Hungary and placing government-friendly officials in key positions to further the governing party’s policies.

The EU sanctions could potentially mean heavy financial penalties. “I call on Poland and Hungary, who have not relocated a single person, to start doing so right now, said Dimitris Avramopoulos, the European Commissioner for Migration. “If no action is taken by them before the next report in June, the Commission will not hesitate to make use of its powers under the treaties and to open infringement procedures.”
The fight over Central European University in Budapest, which Mr. Soros helped found, shows the divide in stark detail.

Prime Minister Viktor Orban’s government sees the Soros influence as corrosive and destructive of Hungary’s Christian and cultural heritage. He sees the school as a vehicle for pushing open-border policies and a secular way of life that essentially has obliterated Western Europe as we used to know it, and says his government is within its right to regulate foreign-financed institutions.

In spite of the threat of financial penalties, the countries of Eastern Europe are fighting back. “European institutions are clearly unable to accept the fact that … the government of Hungary is continuing to practice a migration policy that is exclusively aimed at ensuring the security of Hungary,” Hungarian Foreign Minister Peter Szijjarto said Wednesday.

For her part, Polish Prime Minister Beata Szydlo said this week that “a critical attitude towards the mechanism of migrant relocation is becoming increasingly widespread in the European Union. … Poland cannot accept refugees.”

In short, Eastern Europe’s capitals have told the EU to take a hike. This is why the Brussels globalist kingmakers are so angry at Mr. Orban and the conservative Law and Justice Party in Poland. These so-called “extreme right-wing” elements are not just opposing, but terminating, the globalists’ open-border, welfare society projects.

It is the same reason the left is so furious at President Trump. All their dreams of Marxist nirvana and state control are evaporating before their eyes. In their warped view, to steal a phrase from George H.W. Bush, “This cannot stand!”

So there you have it, the makings of another existential European Union crisis. Having taken a stand, Eastern Europeans will not back down. The angry emotions on both sides are raw.

It is a safe bet that in a few years, the European Union as we know it will be gone. Britain is only the first country to head for the exits. Other sovereign nations will take the necessary measures to protect their people, no matter how much economic pain Brussels tries to inflict on them.