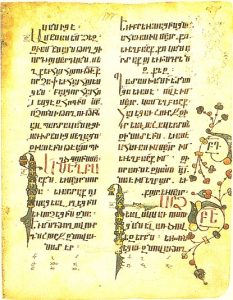 Moscow has ‘suggested’ Armenia make Russian an official language. The ‘suggestion’ seems to be linked to allowing Eurasian Union truckers inside the Russian Federation to deliver goods, but only if Russian is an official language of the country. Belarus, Kazakhstan, and Kyrgyzstan trucks are allowed into Russia, but Armenia is currently not covered by the legislation.

“In this way we’re providing encouragement to governments which respect the Russian language and enshrine it in their constitutions and recognize it officially,” said Leonid Kalashnikov, a Duma member and one of the law’s authors, reported Eurasia.net.

“The decision we’re talking about affects citizens of Kyrgyzstan and Belarus, as the traffic rules of those two countries are studied in Russian. And, coming to work in Russia… of course they know the rules, and and it would also help their work to know the Russian language…Make it [the Russian language] official, and then the law would automatically apply to Armenia as well,” Russian Duma Speaker Vyacheslav Volodin said to Armenian counterpart Ara Babloyan recently.

It seems Russian media characterized this conversation as an Armenian question to Moscow on the issue. Yerevan was not pleased.

“I want to nip in the bud these unhealthy discussions, which have in large part arisen because of poor media coverage, publishing only the suggestion of Vyacheslav Volodin without mentioning the position of the Armenian side,” said Armen Ashotyan, another Armenian MP who was with Babloyan in Moscow. “For us Russian is a language of global significance, but it’s not and it will not be on our agenda to give it the status of an official language and enshrine it in the constitution,” reported Eurasia.net.

As a former Soviet republic, Armenia has been embroiled in one of the most dangerous ‘frozen conflicts’ of the USSR, the Nagorno-Karabakh region, and locked in this deadly struggle with its neighbor, Azerbaijan. The Kremlin sells arms to both sides and provides for Armenian security. There are Russian military facilities inside Armenia which are important to Russian power projection in Central Asia and the Caucasus.

Russia has used various forms of pressure from time to time with its former vassals under Soviet rule to keep them under Moscow’s influence. Language is one of those forms of pressure and a form of instability as we have seen in East Ukraine and elsewhere.