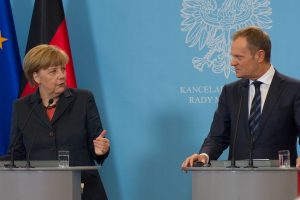 The President of the European Council, Donald Tusk, is paying a visit to Tirana, in the framework of his three-day tour in the Western Balkans. The aim of the visit is preparation of the EU-Balkan Summit on 15 May in Sofia.

The focus of the meeting with Albanian PM Rama this morning was the European Commission’s recommendation to open negotiations with Albania. Tusk avoided meeting President Meta or DP leader Basha. He sounded optimistic, although he stressed that EU accession will not be an open highway. Tusk stated that Albania’s main challenge is to convince sceptical member states and that the process is like a hurdle race for each West Balkan country. “I have a personal feeling that Albanians are more European than some EU Europeans”, said Tusk, while mentioning Albanian religious tolerance. He assured Rama: “You can rely on my assistance in this complicated process”.

Donald Tusk’s visit to Albania comes at e very crucial moment for the country’s European integration process. The Council of Ministers of EU member states will decide whether or not to take into consideration the EC recommendation to open negotiations.

Tusk will also go to Podgorica, Belgrade, Sarajevo and Skopje during this WB tour.

The Albanian position has already started lobbying with sceptical countries, to convince them to give Albania the chance to start the process. Yesterday, the Albanian Head of the Assembly was in Talin, Estonia, at the meeting of EU Heads of Parliament, to meet them and receive support guarantees. On Wednesday, PM Rama is paying a visit to Germany to meet Chancellor Merkel.

In the meantime, the Head of the General Prosecution Office, Arta Marku, is engaged with developing a concrete plan to fight corruption at all levels. Money laundering and organized crime will be dealt with within a short period by establishing special structures, like SPAK and the National Investigation Office, to reach concrete outcomes, as required by the EU.

Czech Central Bank In No Hurry To Raise Rates