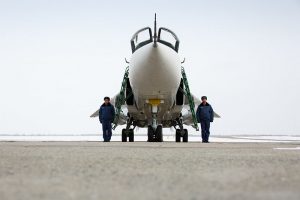 In prominently placed news articles today in the Russian media, the Kremlin continued to promote the narrative that the United States is behind the recent Islamist attacks on Russian facilities in Syria that killed at least two servicemen and reportedly destroyed multiple aircraft. The latest salvo contained allegations that American reconnaissance aircraft had possibly controlled the massive drone attack on the Russian port of Tartus and the Hmeimim air base near Latakia.

“…it is a strange coincidence that during a UAV attack on the Russian military facilities in Syria, a US Poseidon reconnaissance aircraft was cruising for more than four hours over the Mediterranean Sea at an altitude of 7,000 meters,” a source within the Russian Defense Ministry said, reported Russian state news agency TASS.

“Although the programming of systems to control unmanned aerial vehicles and drop GPS-guided munitions requires completing engineering studies in a developed country. Besides, not everyone is capable of calculating exact coordinates using space surveillance data. We would like to stress once again that terrorists did not have anything of that kind until recently,” the source added. 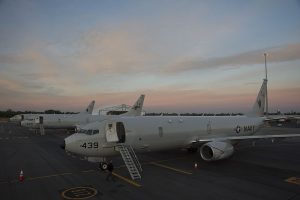 The Kremlin denied the pullout of Russian forces from the Syrian theater was premature.

“The remaining contingent and military infrastructure at Hmeymim and Tartus have the necessary capabilities to counter sporadic terrorist hit-and-run raids, which will regrettably continue. This merely emphasizes the need for stepping up political settlement efforts,” Kremlin spokesman Dmitry Peskov said. He recalled that in making the decision to pull out its military personnel from Syria “Russia proceeded from the assumption there are no grounds for conducting major offensive operations.”

“Everybody, including the president, were aware that terrorists’ attacks would not come to an end overnight, but will continue.”

There are multiple reasons at play for the apparent effort on the part of Moscow to promote the narrative America is behind its woes in Syria. Perhaps first among most is the upcoming presidential election in march. Any problems arising from overseas military adventures need to be blamed on someone else, not the Kremlin, who is focused on achieving a high turnout for legitimacy of the next Putin administration.

In addition, it is always easy to blame the United States for any misadventures the Russian military may encounter, and most of the public will believe it.

And perhaps the Kremlin really does believe the U.S. military was behind the attacks, which would be a very serious situation indeed.