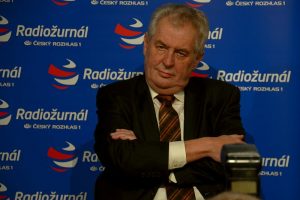 Czech President Milos Zeman looks to win easily the first round in the coming presidential election on Friday. However, he most likely will face a runoff and a tougher challenge a few weeks later. Zeman has been accused of being too pro-Putin and too tough on Islamic migration.

“Czech presidents have limited powers, but they appoint a range of senior officials and their role is pivotal when governments are formed, a process the EU and NATO member country is going through at the moment. The head of state is also an influential opinion maker and represents the country abroad – a role that Zeman, 73, has used to beef up relations with China and Russia while devoting less time to the country’s western allies,” reported VOA.

Zeman’s main challenger, Jiri Drahos, former head of the Czech Academy of Sciences, is within single digits of Zeman’s lead, according to polls.

“I want to bring a completely different style of presidency, bring people together, not label them, a clear embedding of the Czech Republic in Europe, with NATO and the EU as allies, not China,” Drahos, 68, said in an interview at www.dvtv.cz news website earlier in January, reported RFERL.

Zeman has been outspoken against mass immigration into Europe in general and especially into Eastern Europe. He has also made comments that show him to be a friend of Moscow, and China. This has given his competition some ability to chip away at his strong approval rating. Zeman has called Russia’s annexation of Crimea an ‘accomplished fact’ and called for easing sanctions against the Kremlin.