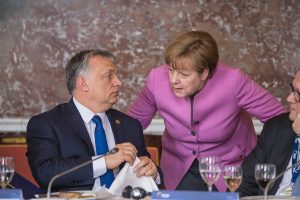 Hungarian Prime Minister Viktor Orban trolled the German press in a recent interview with Bild Newspaper where he spoke truth to German power in Europe over the active solicitation of a massive Islamic migration into the Continent.

“We do not consider these people to be Muslim refugees, we regard them as Muslim invaders.”

“One has to cross four countries to arrive from Syria in Hungary”, Orban said.

“Those people do not run for their lives but seek a better life. The refugees should have requested admission in advance, but instead they had breached the border illegally.”

Orban discussed the dangers to the European people inflicted on them by their liberal governments and refuted claims that Hungary refusing ‘refugees’ was unfair.

“The difference is, you wanted the migrants, and we didn’t.”

Migration, he said, threatens the “sovereignty and cultural identity” of Hungary.

Orban called the migration not a wave of refugees but an invasion.

“We believe that a large number of Muslims inevitably leads to parallel societies, because Christian and Muslim society will never unite,” he said.

“Multiculturalism is only an illusion.”

Grudge Between Moscow And Ankara Deepens