UPDATE: Russian journalist Roman Saponkov posts images of the damaged plans he states were from the rebel mortar attack in Syria on Russian aircraft. The photos were posted on Russian social media site vKontakte. The journalist listed the losses as six Su-24s; one Su-35S; one An-72; one An-30 spy plane; and one Mi-8 helicopter, with one Su-24 and the Su-35S put immediately back into service. To prove his images were real, Saponkov mentions the number 29 on a jet’s damaged tail fin also appeared on Russian state TV video of jets at Hmeimim in December 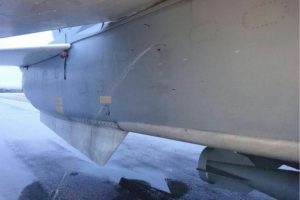 Russian media is reporting that at least 7 Russian aircraft were destroyed in shelling by radical Islamists at the Khmeimim Air Base in Syria on December 31st of last year. Kommersant wrote that four Su-24 front bombers, two Su-35S multipurpose fighter aircraft and an An-72 military transport aircraft were hit by mortar fire and that at least 10 Russian servicemen were injured. The attack was the most serious in the two years the Russian military has operated in Latakia, Syria. An unidentified Russian military/diplomatic source reported that an ammunition depot was also destroyed.

The Russian Defense Ministry confirmed a mortar attack on the base and the death of two Russian servicemen. However, the ministry denied the destruction of aircraft.

“On December 31, 2017, at nightfall, the Hmeymim airfield came under a sudden mortar fire from a mobile militant subversive group. Two military servicemen were killed in the shelling.” 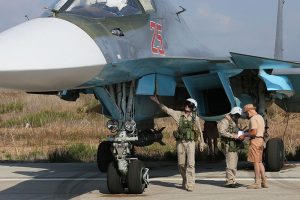 “A report in the Kommersant newspaper on the alleged destruction of seven Russian warplanes at the Hmeymim airbase is fake. Russia’s air group in Syria is combat ready and continues to accomplish all its missions in full,” the ministry said, reported Russian state news agency TASS.

“On January 3, the Russian Defense Ministry said that on December 31 Russia’s Mi-24 helicopter crashed due to a technical malfunction during a flight to Syria’s Hama airfield. Both pilots were killed in the crash. The ministry denied reports that the Mi-24 had been in the line of fire,” wrote TASS.

Russia has recently repeatedly accused the United States of harboring, arming, and supporting Islamic State fighters at its base in Et-Tanf (Homs province). The head of the Russian Armed Forces General Staff Valery Gerasimov declared to Kommersant, “They are actually preparing there.” He also stated there are militants in the Shaddady camp in the north-east of the country, at another US base, taking a new name (for example, the “New Syrian Army”). “Their task is to destabilize the situation.”

The Moscow Times wrote this about the situation, “Meanwhile, independent investigators at The Conflict Intelligence Team (CIT), who monitor the Ukrainian and Syrian wars, expressed doubts about the accuracy of the Kommersant report in a Twitter post on Wednesday. The open-source investigators said that Syrian rebels do not have the military capability to penetrate the airbase.” 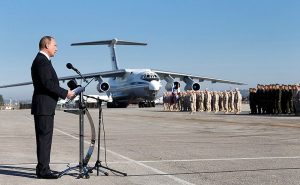 Russian President Vladimir Putin recently made a surprise visit to the Russian facilities in Syria to thank the servicemen at the air base for their work in keeping the Assad regime in power. Russia and Syria signed an agreement in late 2017 to keep the Russian presence in Latakia on a permanent basis. The Russian naval facility at Tartus is also to be upgraded on a long-term lease.

With the Russian president election to be held in March of 2018, the Kremlin is keen to keep Russian involvement in Syria at a minimum, especially in the domestic press.

Kosovo Says It Will Form An Army