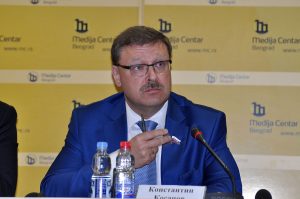 The head of the international affairs committee at the Russian parliament’s upper house (Federation Council) Konstantin Kosachev said Sunday that the West essentially broke the Middle East and should therefore pay to fix it. Kosachev blamed the ‘forced export of democracy’ which caused the Syrian Civil War and the Iraqi ISIS situation.

“Apparently, all responsibility for having the civil war in Syria, which the terrorists have used, first of all is on the Syrian authorities, and on the other hand – on those who have provoked the Syrian opposition for armed confrontation,” he said, reported Russian state news agency TASS.

“Those are the very Western countries, which have been democratizing the big Middle East,” he said. “And Syria is an example of how this attempt of forced export of democracy causes the opposite and ruining consequences for that country.”

“This is why, clearly, the main burden of responsibility for the post-war restoration of Syria should be undertaken by the Western countries,” he added.