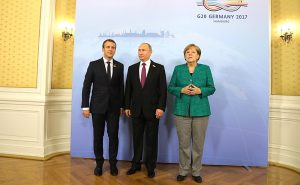 The leaders of France and Germany have once again pushed the leaders of Russia and Ukraine to settle their differences and allow the Minsk ceasefire agreements, put together years ago, to proceed and be implemented. Both sides have violated the accord many times and violence has flared continuously in the Donbass region of Ukraine.

The four leaders had previously held a conference call on August 22nd to discuss the situation, reported Reuters.

“We urge President Putin and President Poroshenko to fully respect their commitments, to support the ceasefire in a public and clear manner, and to ensure that appropriate instructions have been sent to the military and local forces,” they said in a joint statement issued by the chancellery in Berlin.