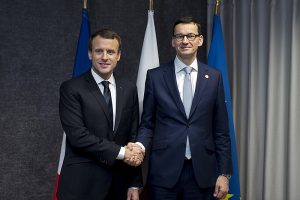 The Visegrad Group of Eastern European nations, which includes Poland, Hungary, Czech Republic, and Slovakia, believe the European Union’s immigration policy has failed and that other countries in the bloc will soon come to their side in the Group’s opposition to Islamic migration into Europe.

During a bilateral meeting between Polish Prime Minister Mateusz Morawiecki and Hungarian Prime Minister Viktor Orban, the two PMs highlighted the nationalist party’s recent rise to power in Austria as an example.

“Democracy has been restored in Austria because the Austrians who reject immigration elected a government that also does not want immigration,” Orban said. “This will be the case everywhere in Europe and I believe it is only a matter of time,” reported Associated Press.

Morawiecki said the immigration issue, which he called a matter of national sovereignty, was “getting even hotter” in the EU “and it seems that it is going in our direction,” added AP.

Hungary and Poland especially have worked to keep the migrants, which are coming to Europe for primarily economic reasons which is not a valid reason for asylum, in their home countries. Now that the war in the Levant and the Fertile Crescent is winding down, there is even more cause to keep the migrants in Northern Africa and the Middle East.