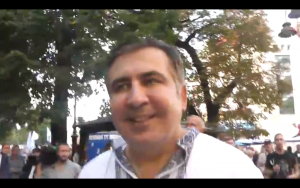 A Georgian court in Tbilisi has found the former president of Georgia, Mikheil Saakashvili, guilty of corruption and sentenced him to three years in prison in absentia. Saakashvili declared the court sentence unlawful and politically motivated by former adversaries and the Kremlin.

“The ruling of the Georgian court in relation to me is fully unlawful and is at variance with all international, national rules and common sense,” the former president wrote on his Facebook page on Friday, reported Russian state news agency TASS.

“Georgian prosecutors brought several charges against Saakashvili in 2014. He was charged with a crackdown on peaceful demonstrators in November 2007; illegal intrusion into the building of the Imedi television channel; illegal acquisition of property belonging to businessman Badri Patarkatsishvili; organisation of an armed attack on lawmaker Valery Gelashvili in 2005; covering-up a crime and falsification of an investigation into the 2006 murder of banker Sandro Girgvliani; and misappropriation of about $5 million from state funds in 2009-2012,” added TASS.

“Judge Giorgi Arevadze on January 5 announced the verdict against Saakashvili, Georgia’s president from 2004 until 2013, convicting him of abusing his presidential powers by trying to cover up evidence about the murder of Georgian banker Sandro Girgvliani, and issuing pardons for four men who were convicted of the killing,” reported RFERL.

“The so-called ‘ruling’ against me by a Georgian court that is fully under control of Gazprom-shareholder Ivanishvili is absolutely illegal and contradicts all international and domestic regulations and common sense,” Saakashvili declared on Facebook.

“The trial of a president for using his right to pardon, which is not limited by any means, shows that the case is fully politically motivated…It also shows that Georgian authorities have not been able to find anything against me in the last five years — neither facts of corruption nor other violations of the law.”

Saakashvili also stated “oligarchic authorities in Ukraine and Georgia are operating in synchronicity and in full coordination with each other…[against] the leader of a battle against corruption, oligarchs, and the robbery of the people.”

Saakashvili is currently fighting charges in Ukraine and possible extradition to Georgia to serve the jail sentence.