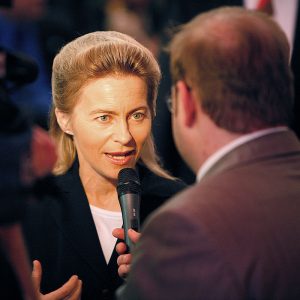 Berlin attempted to calm a diplomatic row with the Eastern European nation of Poland after the German defense minister called for support for the ‘democratic resistance’ in Poland. Germany has been behind the EU initiating ‘infringement procedures’ against Poland for judicial reforms passed by the Polish legislature and enacted into law.

The Polish government accused German Defence Minister Ursula von der Leyen of interference after she called for supporting “the healthy democratic resistance of the young generation” in Poland, reported Reuters.

“This is one of the most explicit statements, which I am not sure whether it is a warning or an admission by the German side of interfering into our internal affairs,” Polish Foreign Minister Witold Waszczykowski told the wpolitice.pl news portal.

“The defence minister’s quote was changed in social media and ripped out of context,” a spokesman for von der Leyen told Reuters on Saturday, reported Reuters.

“Mrs von der Leyen has emphasized that the EU is an inclusive process, which is about securing and consolidating the common values of the EU and dealing with all positions.”

The European Parliament has also initiated legal procedures against the Visegrad Group of countries in Eastern Europe–Poland, Hungary, and the Czech Republic. Slovakia was spared.

Trump And Putin To Meet In Asia