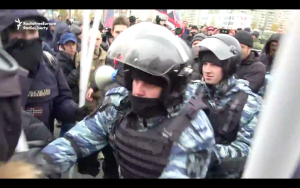 Moscow authorities detained dozens of protestors during a nationalist, anti-Putin march which coincided with Russian National Unity Day celebrations. The crowd chanted slogans during the march such as “Who are we? Russians!” “Glory To Russia!” and “Russians go forward!” reported RFERL. Over 70 people were detained, including all of the organizers, nationalist leader Ivan Beletsky told the Interfax news agency. However, a law enforcement source cited by the TASS state news agency said that only 32 people were taken into custody, reported dw.com.