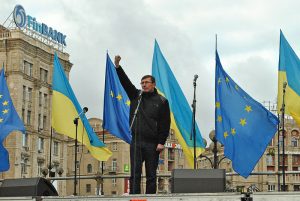 The European Union and Ukraine finalized their Association Agreement today, heralding closer ties, in which negotiations began ten years ago. The signing of the agreement is what sparked the Maidan Revolution which forced the ouster of Ukrainian President Viktor Yanykovych, who now resides in Moscow.

European Union chief Jean-Claude Juncker said he welcomed today the agreement entering into full force, reported Associated Press. “Determination is a virtue. Today, in spite of all the challenges, we have made it.”

“The Association Agreement was signed in June 2014, seven years after negotiations began and gradually introduced to mollify Russia. It promotes political and economic ties and includes a major trade pact…Under pressure from Russia, former Ukraine president Viktor Yanukovych had refused to sign the accord, but he was ousted in a pro-European revolution marked by the killing of demonstrators in Kiev,” wrote Associated Press.