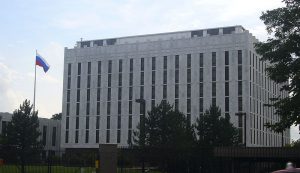 After the diplomatic row in San Francisco, where the fire department was called to the Russian consulate after black smoke was seen rising from the roof, a similar incident took place at the Russian trade mission in Washington, D.C. Russia lodged a protest with the American government after it said American security services threatened to ‘break down the entrance door’ after smoke was seen emanating from the rear of the facility. Calling the incident a threatened ‘illegal inspection’ and an ‘unprecedented aggressive action’, and alleging an attempt at “anti-Russian provocations” by the way of “planting compromised items”, Russia summoned senior diplomat Anthony Godfrey in Moscow to hand him a note of protest, reported The Guardian.

EXCLUSIVE: Here's the fire in back of about to-be-closed DC Russia trade rep building. @janawinter on the scene. pic.twitter.com/oKoKX2OIBv

The State Department reacted to the Russian allegations. “With this action both countries will remain with three consulates each,” spokeswoman Heather Nauert said. “While there will continue to be a disparity in the number of diplomatic and consular annexes, we have chosen to allow the Russian Government to maintain some of its annexes in an effort to arrest the downward spiral in our relationship.”