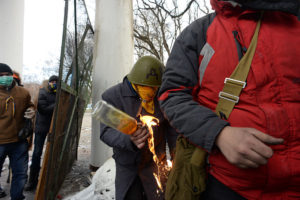 The one thing the Kremlin has been consistently afraid of is mass demonstrations against the government in Russia. Putin’s admnistration has consistently cracked down on any hint of social unrest and attempted to remove those who could threaten this type of ‘color revolution’ in Moscow and other Russian cities. This is why the recent demonstrations against Russian Prime Minister Dmitry Medvedev were so shocking for the Kremlin. Organized by Putin critic, Alexei Navalny, upwards of 60,000 demonstrators came out in force across multiple Russian cities. A humorous video was also released which detailed the alleged corruption of Putin’s #2 and received millions of views.

Today, Putin compared the recent unrest with the Arab Spring and Euromaidan demonstrations in Ukraine which removed the governments in power.

“I personally support the anti-corruption issue being at the center of public attention,” Putin said, before going on to criticize “political forces” which use the issue to promote themselves in the run up to elections, reported The Moscow Times

“This is a tool of the Arab Spring,” he added. “We know very well what this leads to. This was the reason for the coup d’etat in Ukraine, and it plunged the country into chaos.”

The very public comments by Putin on the uprising over the last week shows that Moscow is worried about the trend continuing. Putin said anyone detained in the demonstrations should be punished according to Russian law.

The alleged Russian interference in the recent U.S. presidential campaign can be tied to Hillary Clinton’s interference in the 2012 Russian election where over a hundred thousand people demonstrated against Putin being reelected to the Russian presidency. This massive outpouring of unrest threatened the current government’s hold on power and began the crackdown against the political opposition over the last several years in Russia.