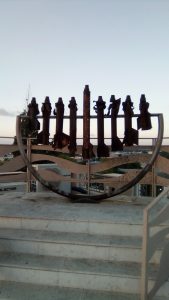 My last trip to Israel was during the 2014 war with Hamas in Gaza. At that time, the sirens wailed by the hour as Palestinian terrorists launched rocket after rocket over the border into Israel proper.

Even Tel Aviv was not immune.

Of course, the Iron Dome defense system worked splendidly and protected the Jewish state from the incoming artillery. Tourists were told to move to the hotel stairwells when the air raid sirens went off. The smoke trails from the air defense missiles crisscrossed over Tel Aviv as the Iron Dome worked its magic. Guns were everywhere. Every other civilian carried a firearm to ward off the terrorist threat.

I was even rocketed myself when visiting the village of Sderot on the Gaza border, with one projectile from a large salvo landing 40 yards away from me. It blew a hole in a grandmother’s backyard, where her grandchildren only a few minutes before had been playing joyfully.

After the projectile hit, the walls of the surrounding buildings were sliced with shrapnel. The Iron Dome was not perfect after all; some rockets got through.

The village of Sderot absorbed 2,500 Katushas that year. Nearby Ashkelon received a similar number. The Israeli military was deployed en masse. Artillery tubes crowded the field by the train station in Sderot, firing at locations where the missiles originated.

Even the trains had stopped running to the vulnerable town. A smoky haze that could be seen from the border villages covered Gaza. The war was in full swing.

Israel made it through that war. The Hamas tunnels were destroyed and many terrorists killed, as well as Israeli citizens and military. At the cost of much life, the terrorists, bent on the destruction of Israel and the murder of its people, were stopped.

Unfortunately for the Israelis, the rockets have started again.

I’m writing this on an airplane having just taken off from Ben Gurion airport, making my way to a meeting in Europe. This time around, the situation is markedly different, even though once again violence is on the rise in Gaza. I visited the border villages again before I left.

What impressed me on this visit was the confidence of the Israeli people. The security was much less oppressive. I barely saw a handful of weapons out in the open during 10 days in the country.

The Israeli military wasn’t present in heavy numbers in the border towns, at least not out in the open. Ashkelon and Sderot were thriving, expanding, growing, with families and lots of children everywhere. No one was concerned about Palestinian terrorists. The walls were working, keeping the killers away from the Israeli people.

I had lunch with a journalist colleague who lives in Jerusalem. He laid out for me the altered facts on the ground in the region over the years and how an effective security wall can rewrite the strategic balance of power.

“The Palestinians are screwed,” he started off. “They have tried suicide vests, car bombs, stabbings, tunnels, rockets, etc. Nothing has worked. They have been opposed by Israeli might at every turn. What do they do now?” he asked.

While standing on the top of a yeshiva in Sderot a few days before I left, I looked out at the Gaza border. This time there were several large plumes of smoke. “Now Hamas is reduced to flying flaming kites to burn Israeli grassland. They are defeated,” my friend said.

Israel will survive this phase of the conflict as well and come out even stronger. In fact, her people will continue to thrive. With President Trump in the White House, the U.S. is once again unambiguously on her side — as it should be.

Take it from one who has just been there: For all the media hand-wringing and pro-Palestinian forces at the U.N. and in Europe, Israel is stronger than ever.

Bolton Heads To Moscow To Set Up Putin Summit

I Support the Actions of Albanian Astir Victims