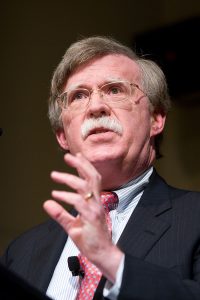 US National Security Advisor John Bolton will visit London and Rome on June 25-27 to discuss national security issues with British and Italian officials and then travel to Moscow for consultations on a potential meeting between US and Russian Presidents Donald Trump and Vladimir Putin, National Security Council Spokesman Garrett Marquis wrote in his Twitter account on Thursday, reported Russian state news agency TASS.

On June 25-27, U.S. National Security Advisor John Bolton will meet with U.S. allies in London and Rome to discuss national security issues, and travel to Moscow to discuss a potential meeting between Presidents Trump and Putin.

President Trump has made it no secret that he wants better relations with Russia. As the Trump/Russia investigation winds down in the United States, or heads to a climax where Democrats will try to impeach, it seems Trump now feels more enabled to fulfill his agenda. The summit with North Korean leader Kim Jong-un was likely aided by Moscow. Much negotiation is going on behind the scenes.

On June 10, the Russian president confirmed he was ready to meet with Trump as soon as Washington was ready for the summit, added TASS.