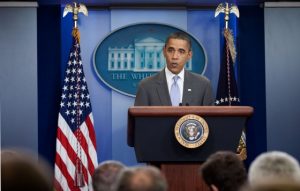 In the oath of office given to an officer of the United States military, he is required to defend the Constitution against all enemies, foreign and domestic.  As the Obama media enables the continuing crimes of the remnants of the Obama administration which are destroying the rule of law in this great country, and are assisting in covering up the treasonous activities of the previous president and his minions, I don’t think there is a better example of what Lincoln called ‘an enemy from within’.

We all know journalism is dead, at least in the mainstream press. However, now that the facts are coming out regarding the lengths the Obama administration criminally used the security services of the United States against their political enemies, the nefarious activities of most of the Mainstream Media have now crossed the line into aiding and abbetting.

When combined with the violent Lefts attempts to also restrict free speech in America, the double-edged sword is a clear and present danger indeed.

I’m not one to advocate government control of the media, for this simply plays into the hands of the Marxists, bent on destroying our Bill of Rights. What I am for is market pressure. This is what works. The audiences of the liberal newspapers around the country are already shrinking. All you have to do is read the stories about editors at various print establishments whining about having to face reality to understand that. The audiences of the Obama cable networks are also under pressure.

For too long, conservatives have not taken advantage of their inherant market power. If you believe in freedom and you click on an article, watch an advertisement, buy a paper of one from one of the Pravda outlets in the U.S., you are simply wrong.

Today, Americans have to search out good news and reporting organizations they can trust and believe in. They are there, you just have to network and find them.

Journalists like John Solomon, Sara Carter, Sheryl Atkinsson, etc are digging up stories every day, to the chagrin of the propagandists.

The crimes of Obama are being revealed. What I am scared of is that we have only scratched the surface. Who knows what secrets Clapper and Brennan gave away to our enemies. Who knows who was illegally spied on and for how long. This is some scarey stuff.

What I do know is that all of this has to be revealed for America to have a chance at real freedom and the rule of law again. Sunlight is the best medicine.

You are not going to find that sunlight in the corrupt Obama media.

However, you can find it. You just have to look.