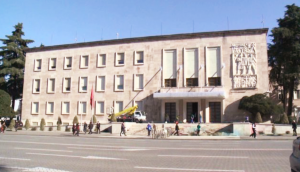 The recent political situation in Albania is more than chaotic. On the verge of an EU decision to open accession negotiations, everyone was expecting that finally this would be a season of cooperation among the political spectrums, that parties would consider the June decision as important. The hope was they would leave all personal or party interests aside. However, once again, Albanians are disappointed by their politicians, left or right, and no one is sure anymore what the situation will bring for the country.

The socialist position in power continues to push sceptical EU members to move forward and open accession negotiations with Albania, showing them the government is continuing the fight against corruption and conduct the vetting process. But the fact is that only a small number of judges and attorneys have been forced out of the judicial system until now. No big files have been opened, no “big fish” condemned, though every day online media publish facts about their involvement in corruption, theft and organized crime.

While the position appears determined to fight all evils of Albanian society, mostly accusing the opposition, the Socialist Movement for Integration and the Democratic Party, there is evidence produced by the latter that position leaders or their families have been involved in drugs and corruption. The former Interior Minister, Saimir Tahiri, is in home arrest at the moment, accused of drug trafficking a couple of years ago, when his relatives were arrested in Italy under the same accusations. Even the current Interior Minister, Fatmir Xhafaj’s brother was condemned for drug trafficking in Italy years ago and his migrating to Albania allowed him to escape punishment in the neighbouring country. His name is quite notorious these days and following the political pressure of the opposition against the Interior Minister, with news and video registrations, which until now have no confirmation from the General Prosecution Office, the minister’s brother has decided to go back to Italy to face justice. Also, the Interior Minister does not intend to resign.

The question is, who are the people that run Albanian politics? Two consecutive interior ministers allegedly involved in drugs…and not just them. There are other important names announced on both sides, right and left. Of course, we have to wait to see if there is true evidence whether they or their families have committed any crimes. But everyone’s question at the moment would is – has Albania run out of honest, decent people to be elected to the parliament or government? It seems so or maybe decent people are among those not involved in politics.

The same question was made to Prime Minister Rama about his interior ministers, by a young journalist a couple of days ago… and his answer was to interrupt the press conference, accusing the journalist of representing the DP camp, at a time when facts should be faced properly.

What about the opposition? It is weaker than ever, having an incapable leader at the head and behind him, a former DP leader, accused of many dubious actions and corrupt affairs, since the time he was President and PM. The only thing they can do is call on people to protest, stoking violence and involving criminals or paid volunteers. No more democratic ideals remain within DP and a lot of its faithful members have turned their back now.

The next opposition protest will be this Saturday, on May 26th. Hopefully, there will be no violence on both parts. Otherwise, let’s say goodbye to the possibility of an EU decision for opening negotiations in June. Political stability is needed at the moment, and all that is happening are the last efforts on the part of the corrupt to distract attention from the main priorities, i.e., the vetting process and other judicial reforms. They know they would end up in jail soon, if things went smoothly and reasonably. Albanians are aware of this now and more disappointed than ever.

Russians Speak: Communism Is Not Coming To America, It’s Here, And Millions Will Suffer