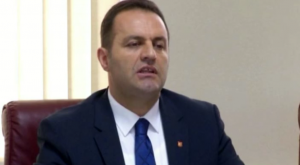 For months now, the former Head of the Albanian General Prosecution Office, Adriatik Llalla, has been absent from Albania. After he and his family were refused a US visa, for being involved in corrupt, criminal actions such as closing many important files of the Albanian judiciary system, he settled in Germany, where he had sent his family in 2016. It seems, he does not intend to come back home.

According to “Pamfleti” online newspaper, Adriatik Llalla is seeking political asylum in Germany, asking for immunity. His transfer has been well arranged, so as not to have legal barriers.

At first, his attorney said the former General Prosecutor was in Germany for health reasons. But for more than a month now, there has been no more communication with his attorney, since political asylum seekers are not allowed to communicate with their state authorities.

Since his removal from debatably the most corrupt institution in Albania, the General Prosecution Office, Adriatik Llalla has hurled attacks and accusations against the media, the socialist government, and internationals, especially the US ambassador in Albania, Donald Lu, who has always considered him as one of the “big fish”.

His closing important legal files in exchange of personal favours, like receiving property and money, then transferring it abroad, in cash or by bank, is the reason why the US refused to issue a visa.

Llalla has been accused of intentionally hiding evidence, under the political pressure, that would resolve corrupt issues and crimes in Albania. Such actions could send him to prison. The most notorious closed files have been:
• 21 January 2013 peaceful opposition demonstration, in which four people were victims;
• Gerdec munition warehouse’s explosion, with 26 people killed and 300 wounded;
• energy distribution affair, with the privatization of OSHE by CEZ and then the agreement of Ces-Dia to collect debts, considered as top corrupt affair in Albania;
• the high cost of the Nation’s Road;
• former Sea Agreement with Greece, in which a part of the Albanian territory was unjustly given to Greece.
• Health concessions involving the socialist Minister of Health during the previous leftist government.

According to “Pamfleti”, the former General Prosecutor is seeking asylum in Germany, presenting himself as a penitent of justice, pretending his life is threatened by politicians that have put him under pressure. Most files have to do with the Democratic Party and its governments during 2005-2013, as well as its coalition with the Socialist Movement for Integration. The names involved include: the former Head of DP Berisha and his family, current President of the Republic Meta, current Head of DP Basha, former DP and SP ministers, etc.

Currently, all these issues are being investigated by the Special Prosecution Office, as a demand of the vetting process, after a lot of effort from Adriatik Llalla and the opposition failed to alter the proposed law to sanction their final closure. If it is true that Adriatik Llalla is using the card of the justice penitent in Germany, maybe he will soon open his “Pandora’s Box”, out of which many other “big fish” could end up in the justice net. This, for sure, would satisfy the EU and US that continue to press Albania to make reforms and fight corruption and crime fruitfully, as a premise to open negotiations soon.

Nothing Left To Steal