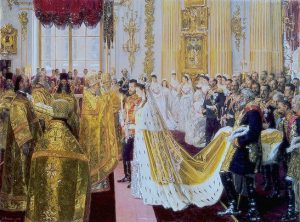 Russian state-controlled media brutally bashed the royal wedding of Prince Harry and Meghan Markle…before, during and after the event. Russia state TV Channel One and Russia 24 refused to broadcast the wedding, reported Express.co.uk. The official comments were quite nasty.

“The saturation coverage unleashed a flood of agitation from the great unwashed, who took to Twitter to vent their frustration at the fact that they were being force-fed a celebration of the petrified leftovers of a bloody empire with a disgraceful history.”

“AP has joined the ranks of those being instrumentalised, describing a grandmother’s choice of alternate names for her grandson and his wife as breaking news.” Russian media picked up and regurgitated Wikileaks’ comments as well.

Analysts attributed the negative reaction from the Kremlin as evidence of the souring relations between London and Moscow over the poisoning of former Soviet spy, Sergei Skripal and his daughter with a nerve agent, in other words, chemical weapons, weapons of mass destruction.

The nasty coverage is even more striking when you consider many in the Russian Federation desire a return of the Russian royal family, or tsar (a derivative of Caesar in Russian). Russian President Putin has picked up the moniker as ‘the new tsar’.

Muscovites seem to have just enjoyed the beauty of the ceremony and Meghan’s dress. “We watch it because it is so beautiful, like a fairytale’, one person said. “It’s comparable to the wedding of Grace Kelly.”