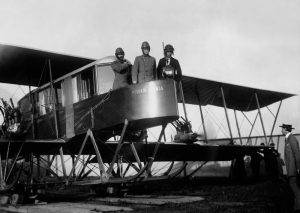 The Kyiv-born aviator who fled the Bolshevik Revolution and created the helicopters that have served U.S. presidents from Eisenhower to Trump.

Igor Sikorsky (pictured in 1914) was born into a well-to-do family in Kyiv (then part of the Russian Empire) on May 25, 1889. Inspired by Jules Verne novels and the sketches of Leonardo da Vinci, Sikorski decided, at age 19, to dedicate his life to flight.

By 1910 he had cobbled together two “helicopters.” He later recalled, “The first of these ships refused to leave the ground, while the second (pictured) could lift itself but refused to lift me.” Sikorsky realized that neither engine technology nor his funding was ready for his lofty ambitions.