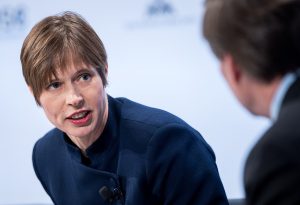 The Estonian president, Kersti Kaljulaid, is visiting Ukraine on a state visit to help Estonian businesses fight the lack of rule of law in the former Soviet republic. She will also tour the war-torn Donbass in East Ukraine and get a briefing from Ukrainian military commanders in the region.

“This will definitely be one topic. The validity of the principles of the rule of law and carrying out reform not only on paper, but also in such way that something really will change — that has been a topic also at earlier meetings on the level of heads of state,” the spokesman for the Estonian president Taavi Linnamae said Monday. “This is definitely one of the topics that we will deal with there,” reported The Baltic Times.

“We will meet with the leaders of NABU to discuss the state of play in the fight against corruption,” Linnamae said.

“At the same time it is no secret that we have real cases in Ukraine when it comes to Estonian investors. I think that this is in the interest of the state as well — to also stand up for its entrepreneurs and their investments.” The Estonian embassy in Kiev and leaders of the state on different levels have been dealing with it, he added.

“Because if we look at the broad picture, the development of Ukraine is held back by two things — the war in eastern Ukraine and corruption, weakness of the rule of law. When the principles of the rule of law don’t apply, investors have very little interest in going there, the economy will not develop and people’s wellbeing will not grow,” wrote The Baltic Times.

Because of Estonia and other Baltic nation’s precarious geographic position in NATO from a strategic standpoint, Kaljulaid will also attempt to learn from Ukraine’s fight with pro-Russian separatists in Donbass. “In eastern Ukraine, Kaljulaid is expected to visit Harkiv Oblast and the staff of the Ukrainian Joint Forces Operation in the Donbas war lear about the situation on the ground regarding humanitarian aid and reconstruction,” reported Baltic News Network.

Leaders of all three Baltic countries have pushed for a stronger NATO presence in the Baltic region to serve as a tripwire for any possible Russian incursion.