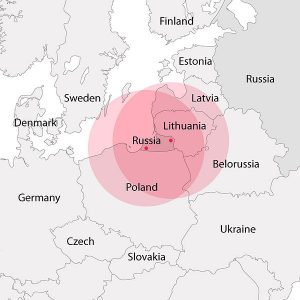 The Baltic region has been a concern for the North Atlantic Treaty Organization alliance for the last decade as Russian behavior has morphed into that reminiscent of the Soviet Union. The Estonian defense minister vocally made these points in a recent interview, highlighting NATO’s concerns in the volatile, militarily-crowded region.

“Russian warships have been clearly attempting to pressure NATO to leave the Baltic Sea,” Luik told Finnish newspaper Helsingin Sanomat in an interview published on Thursday, reported The Baltic Times.

Behaviors such as approaching to an unsafe, maritime distance by Soviet forces and attempting to harass and deter Western military assets were well documented during the Cold War.

“This is happening in international waters. It is a violation of good maritime practice,” Luik said.

The Russian exclave of Kaliningrad, nestled strategically between the Baltic nations and Central Europe, has been heavily militarized by Russian armed forces. The nuclear-capable Iskander medium-range missile system has been robustly deployed, as well as a sophisticated air defense network to threaten NATO aircraft.

“Extensive equipping is underway. It is completely unwarranted and is a sign of aggressiveness in our region,” Luik added. “Russia has developed a high-level system for the relocation of troops, which means that units which today are on the Ukrainian border may be on the border of the Baltic countries tomorrow,” he said.

The Suwalki Gap, a geographic funnel opening to the Baltics from Russia, is strategically indefensible and NATO has admitted as much, saying it will take time before the alliance can deploy significant countering forces to the region to repel a Russian advance. Analysts say Moscow could secure the Baltic region in a period of three days.