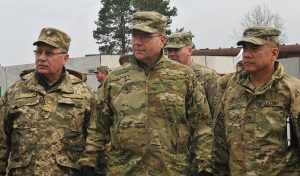 The former commander of US Army forces in Europe, Lieutenant General Ben Hodges (Retired) declared this week that American ground troops should be moved into the Batlics states to deter possible Russian aggression in the region. The Baltic nations are at risk of being overrun quickly before NATO ground forces could be brought to bear against a Russian invasion due to their geographic isolation.

The United States military has rotated American forces through the Baltics in the past in a deterrence role but Hodges suggested permanently stationing logistics and air defense units to Lithuania, Latvia and Estonia.

“I think a full-time logistics capability and also a full-time air defense capability, using rotational forces, will be a useful way to increase capability for deterrence. Also, it will put US soldiers in Estonia, Latvia and Lithuania full-time,” Hodges said to reporters in Vilnius, reported The Baltic Times.